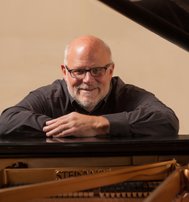 Dr. Van Dyke teaches piano and coaches chamber music at the Practice to Prosper Piano Studio at the Cincinnati Music Academy in Cincinnati, Ohio. An active performer and pedagogue, he has presented his research at local, state and national venues.

Dr. Van Dyke’s  students range in age from five to seventy, performing all styles of repertoire. Students learn to appreciate music as they incorporate music theory, music history, ear-training, collaborative piano and technical development into the regular scheduled lesson. With the studio motto, "Practice to Prosper," his highly motivated students work diligently to make the jump from intermediate to advanced literature.

As an active member of MTNA, Richard chaired many events for the OhioMTA Southwest District. He served MTNA as the OhioMTA Southwest District secretary and president. His state board positions include the Independent Music Teachers’ Forum Chair, the MTNA National Competitions Coordinator and VP-Student Activities. Dr. Van Dyke is currently the Immediate Past President of the OhioMTA and is an adjunct professor of music at Northern Kentucky University

Richard has performed numerous solo and chamber music recitals throughout the Midwest. In addition to recital performances, Dr. Van Dyke has given lecture recitals/demonstrations to Ohio Music Teachers Association and KMTA members. He also serves as a guest lecturer at both the University of Cincinnati and Northern Kentucky University. He has been chosen to speak at the National Conference on Keyboard Pedagogy in Chicago, IL (July 2011 and July 2015) and Music Teachers National Associations National Conference in Anaheim, CA (March 2013).